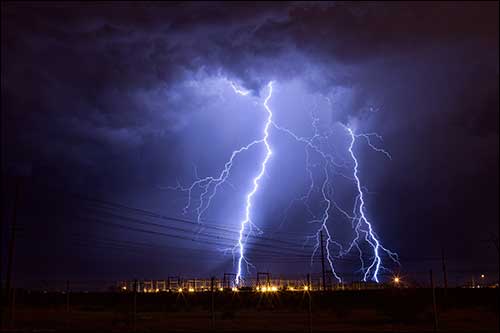 If you hear the two words “data disaster,” you’ll probably think immediately of a cybersecurity event. And for good reason: global damages from ransomware attacks are estimated to cost $20 billion this year, according to Cybersecurity Ventures.

But the impact of natural disasters is much higher. The global impact of natural disasters is an average of $93 billion a year over the last 10 years, according to insurance broker Aon. In a worrying trend, natural disaster costs for the first six months of 2021 are the highest they’ve been in 10 years.
Consider the terrible effects of flooding in Belgium and Germany, or flooding in Zhengzhou, China. In the U.S. alone, devastating fires in California and power brownouts in the west are part of 2021’s disaster toll. Earlier this year, severe weather and storm damage in Texas triggered a chain of events affecting data servers in several states. Admittedly, it’s hard to determine how much of that natural disaster cost is credited to business losses alone. However, even estimating it at a low guess of 20 percent gets you close to the global cost of ransomware.
Natural disasters are different from man-made data disasters. After all, it’s one thing to deal with malware targeting apps, but it’s another thing when the servers are soaked in storm water. For SMBs, the physical loss of infrastructure can be such a severe blow that it can be a business-ending event.
For solution providers or MSPs serving the SMB market, reminding clients of the rising costs of natural disasters is another way to make a good case for business disaster recovery solutions.
This article from CRN says that MSPs are reporting “historic” sales growth in 2021. Another CRN article mentions the key areas MSPs are “doubling down” on, including disaster recovery-as-a-service (DRaaS).
If you mix the current concern over malware and keeping data protected with the increasing use of hybrid and cloud solutions, it only makes sense that MSPs are focusing on DRaaS. It solves so many problems at once—especially for SMBs with tight resources. When you combine features such as failover and continuous data protection, recovery of data can in some instances be measured in seconds.
Failover is the ability to quickly switch over to standby network, database or server. Think of it as an insurance policy against failure due to man-made or natural disasters. The failover version can cloud based, which in the case of a natural disaster is a huge plus.
Most companies are still playing catch up when it comes to disaster recovery plans. A cloud-based DRaaS solution fills an immediate need, but can also be part of permanent data backup and protection strategy. As the CRN article mentioned, DRaaS is a key area for MSPs—and can be a key to success for your clients, as well.